7 February 1478: Thomas More was born on this day to Sir John More who was a successful judge and lawyer, and Agnes Grainger. Thomas followed in his father’s footsteps and also became a successful novelist and renowned intellectual.

The portrait below is a recreation of the original by Hans Holbein which is lost to us now. This shows Thomas and his family, including his adoptive daughter, Margaret Giggs who, together with his eldest, he showed special favor. More was described as a caring father and deeply religious. He schooled all of his daughters in subjects that were reserved for boys, and never touched them with so much -according to one contemporary- “as a feather”. 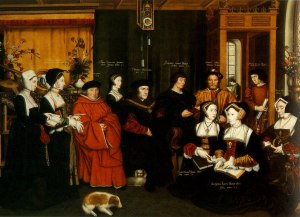 He became Lord Chancellor in 1529 but resigned two years later. He was then arrested in 1534 for refusing to recognize the King as Head of the Church and was executed in July of the following year.

Among his many works are The Twelve Properties of a Lover, a biography of Richard III, and his most famous work, Utopia.

In fiction as in history More continues to be a polarizing figure but he doesn’t need to be. Is it possible that we see him and his contemporaries as they truly were? -As men of their times, subject to their era’s prejudices instead of being exempt from them? And more importantly, recognize (in More’s case) his attributes as well?