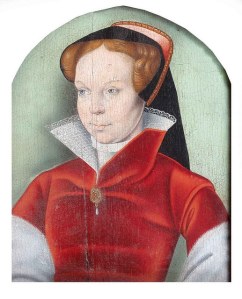 20 FEBRUARY 1516 -Mary I was Christened at the Church of the Observant Friars.
Her Godparents were Cardinal Thomas Wolsey, the Duchess of Norfolk, her grand-aunt Katherine of York Countess of Devon and Margaret Pole. After she was baptized she was returned to her mother who was waiting for her at the Queen’s Chamber in Greenwich.

Henry whispered to the Venetian Ambassador that he and Katherine were still young and they could have more children. Ironically, these were the same words he whispered to his second wife when she gave him another daughter seventeen years later.
Mary was named after the Virgin Mary and her aunt the Princess Mary Tudor, Duchess of Suffolk and Queen Dowager of France.

One thought on “A Royal Princess’ Christening”