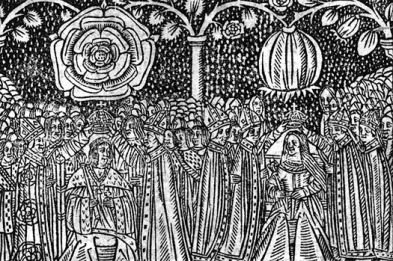 On Sunday June the 24th 1509, Henry VIII and Katherine of Aragon were crowned jointly at Westminster Abbey. The procession began three day before when they took possession of the Tower. After seven long years of living in a political limbo, waiting in vain to marry the next in line to the throne, her dreams had finally come true. She and Henry had taken everyone by surprise with their marriage. The handsome boy who had accompanied her to the altar when she married his eldest brother Arthur seven years ago took after his maternal grandfather, Edward IV. Like him, he was determined to show everyone that he was his own man and that he would marry the woman of his choosing. Although he claimed that his father had made him promise to take his brother’s widow as his wife, not many believed this tale, yet they were all eager to please their new King who was a great contrast from his late father. When he and Katherine were married, the ceremony had been very low key; their coronation was however was beyond splendid. For Katherine, this must have all seemed remotely familiar. When she married Prince Arthur, she had been greeted with pageantry that lasted for days. This was no different. Henry wanted to spare no expense. The King, as one of his courtiers [Lord Mountjoy] said, was not after “gold, gems, or precious metals, but virtue, glory, and immortality.”

Two days after Henry and Katherine took possession of the Tower of London, the city of London prepared to welcome their new king and queen-to-be. At about four o’clock the celebrations began with guildsmen lined in the streets. The Lord Mayor (Stephen Jennings, once a merchant) was among them, standing erect, wearing his golden chain of office while the other aldermen were close by alongside the guards who were in charge of crowd control. Henry and Katherine emerged from the Tower wearing resplendent gowns, each with their separate entourages. Henry beneath a canopy of cloth and state, wearing a crimson robe, golden coat studded with precious gems, mounted on a huge worse draped in golden fabric. Katherine followed him, riding in a litter borne by white horses, and wearing a beautiful white gown, similar to what she wore when she married Prince Arthur. Her hair was loose, as was the tradition of Consorts to symbolize their purity. Around her head was a golden and pearl circlet.

Among her retinue was none other than the newly knighted Thomas Boleyn. Henry VIII made it his duty to continue the tradition of creating new Knights of the Bath on the eve of their coronation. Besides him was the King’s best friend, the rakish Charles Brandon, the ambitious Duke of Buckingham who was dressed for the occasion, wearing gold and diamonds.

The two empty thrones were waiting for them in the Abbey where they would be crowned the following day. No doubt, they were eager to get it over with as a heavy rain poured down on them that Saturday. Many of their courtiers took shelter until the shower stopped. But Katherine –as her new husband- did not. They were born royals, and Katherine above all, trained to be Queen all her life. She had seen her mother ride through the camp, greeting soldiers, putting aside her servants’ discomfort as they saw her injured men. In Isabella, Katherine had learned that a Queen was Queen not just because of her lineage, but because of her bearing. And Katherine was ready to show that as her mother before her, she was going to take on her new role seriously. However, seeing her ladies’ discomfort and acknowledging that she could not let her litter be more ruined (her dress and hair were already ruined, Katherine like so many was drenched in rain water); she took refuge with them on a nearby tavern called the Cardinal’s Hat.
Despite Katherine’s greatest efforts; she could not avoid the superstitious ideas that were running through everyone’s mind. A rain on a day like this, on the eve of their coronation, on mid-summer’s day was seen as a bad omen. This was an age where omens were taken seriously, where superstition was seen as logic, and were the former were used as evidence of God’s anger or discontent.
The royal entourage managed to reach Westminster Palace where they dined with their guests before retiring to the Painted Chamber.

The following morning was better than expected. The ceremonies were resumed and they were crowned at Westminster Abbey.  As the day before, the two were splendidly dressed and as with Henry’s father and namesake, his grandmother, Margaret Beaufort, wept. Only this time they were of relief and joy because her son’s dynasty –against all odds- had survived and now the new generation would be crowned.

“Westminster Abbey was a riot of color. Quite in contrast with the somber, bare-stone interiors of medieval churches today, these pre-Reformation years made worship a tactile and sensual experience, with wealth and ornament acting as tributes and measures of devotion. Inside the abbey, statues and images were gilded and decorated with jewels, walls and capitals were picked out in bright colors and walls were hung with rich arras. All was conducted according to the advice of the 200-year-old Liber Regalis, the Royal Book, which dictated coronation ritual. The couple were wafted with sweet incense while thousands of candles flickered, mingling with the light streaming down through the stained-glass windows.” (Licence)

The Archbishop of Canterbury, the head of the Catholic Church in England, William Warham, conducted the ceremony. In a demonstration of precedence, Henry’s throne was raised higher than Katherine’s. “Like his father” Patrick Williams writes in his biography on Queen Katherine, “Henry VIII was crowned not just King of England but also King of France.” An ancestral title stretching all the way to Edward III who started the one hundred years war with the intention of winning more French territory. His descendant Henry V had conquered France with his son becoming the first English King of France. But he had also lost it. England had no French territory left except Calais, a small province that still served to remind England of its days of glory. Henry VIII would prove to be like many of his Lancastrian relatives, a man who ambitioned too big, but too soon.

Buckingham as Lord High Steward carried the Crown of St. Edward which was used to crown Henry, on his right, the Earls of Surrey and Arundel carried the scepter and the orb. After Warham made the traditional speech, reaffirming Henry as King of England and asking the people if they accepted their new king; he anointed Henry with the holy oils then placed the crown on his head. Then it was Katherine’s turn. Seated in her smaller throne, she was anointed on the breast and forehead, then given the scepter and rod, and finally had the crowd of St. Edith placed on her head.

After the Mass they went to St. Edward’s shrine behind the high altar to change their garments of state for more adequate clothing for the banquet that was waiting for them at Westminster Palace.

There was no one in the realm that didn’t praise their new king and Queen. Besides Lord Mountjoy, Thomas More, who was young at the time, wrote extensively on the virtues of the new king and queen, adding a year later that “this lady, prince, vowed to you for many years, through a long time of waiting remained alone for love of you.” Days after their coronation, the King and Queen moved to Greenwich to enjoy a series of jousts that were made in their honor, seated in a wooden box with their royal devices, the rose and the pomegranate engraved there as well as the letters H and K intertwined.

One thought on “Henry VIII & Katherine of Aragon: The Rose and the Pomegranate’s Coronation”