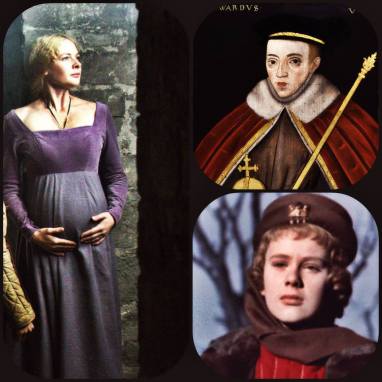 On All Souls’ Day, November 2nd, 1470, Elizabeth Wydeville gave birth to Prince Edward while she was still at sanctuary in the Abbot’s House at Westminster Abbey. She was expected to give birth amidst splendor in the Tower of London, but when the odds turned against her husband, she was forced to flee the comforts of her chambers with her mother and daughter to Westminster Abbey. In spite of Richard Neville [Earl of Warwick] animosity with the Woodvilles, he wasn’t cruel to Elizabeth and upon learning she was going to give birth, he and Henry VI sent Lady Scrope and others to assist her in her delivery three days earlier, in addition to paying for their fees.

In great contrast with her predecessor, the last Lancastrian Queen [Margaret of Anjou], Elizabeth didn’t ask the people of London to fight for her. When she learned that Warwick’s forces were approaching two months before, she ordered the lord mayor and the aldermen to secure the city of London, but when they told her that they couldn’t hold any longer, she accepted this and told them it was better for them to submit to the new regime.
Overnight, Elizabeth had become very popular with the people. This humble act demonstrated that she was a Queen who lived up to the ideals expected of a wife and Consort. She and her family subsisted thanks to the Abbot’s and the commons’ charity.

Thomas More, writing nearly a century later describes the boy’s birth, as being born “with no more ceremony than if he had been a poor man’s son.” This is not entirely inaccurate, since his father and uncles were still at Burgundy, planning for the right moment to strike, and with Henry VI back on the throne, it was unclear what the boy’s role would be (if any) if his father never got to reclaim it. The boy also received a humble christening. Instead of the traditional royal relatives, or stand-ins for foreign royals, his godparents were the Abbot Thomas Milling, the prior John Eastney and Lady Scrope.

No doubt, learning of his son’s birth, made Edward IV more determined. Less than a year after that, he returned to England, slaying the Earl of Warwick at the Battle of Barnet, and less than a month after that, his rival’s son (also named Edward) at the battle of Tewkesbury, and not long afterwards his rival himself.

Edward IV wasted no time investing his son as Prince of Wales and set up his household. Among the people elected to rule his son’s household were many of his wife’s relatives, including herself and her brother, Anthony Woodville, the Earl of Rivers.

Although he is commonly referred to as Prince Edward or Edward V, it should be noted that he was never officially crowned. After his father died, a crisis emerged between his maternal relatives and his uncle, including the nobles supporting him (because of their resentment against the Wydevilles), as to who would be his Regent. Since none of them trusted each other, and they both believed themselves better to handle the job; Richard made the first move, imprisoning Edward’s favorite uncle (Anthony) and Hastings. And he forced Jane Shore (Edward IV’s mistress) to walk a walk of penance to atone for her sins. After his brother’s marriage to Elizabeth was declared null and void, his nephews and nieces were declared bastards and barred from the line of succession, making him the only one eligible to be King.

After the summer of 1483, months after Edward had been put in the Tower of London before he was joined by his younger brother Richard, he was never seen or heard from again. Doctor Argentine on his last visit, said that while Richard looked more optimistic because he was younger, Edward did not and it was as if he knew that his days were numbered.