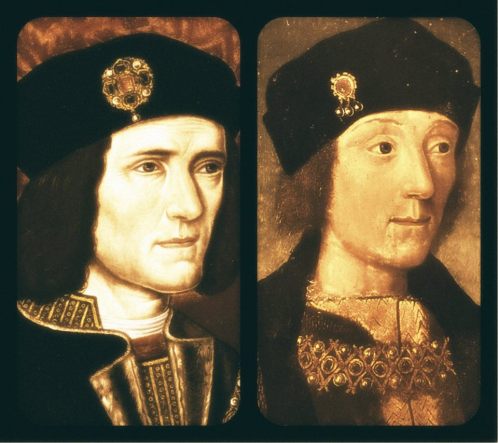 On the 7th of December 1484, Richard III issued a thunderous proclamation against Henry Tudor (then) Earl of Richmond. Richard had sworn to protect his nieces and welcomed the eldest two (the once Princesses, now Ladies) Elizabeth and Cecily of York to court. Henry Tudor had been a nuisance to Richard ever since the Christmas of ’83 when he pledged to take the crown and marry Elizabeth of York, thus uniting both Houses. But for the first time during his reign, after the death of his son, Prince Edward of Wales, Henry had become a serious threat.
Those who criticize Elizabeth Woodville and her eldest daughters for accepting Richard III’s offer of peace, ignore the fact that when he did this, his son was still alive and as far as everyone knew, his reign could go on for many years. The death of his son changed all of this. With no heir and a sickly wife, the threat of Henry Tudor became greater. He had with him not only staunch Lancastrians but Edwardian Yorkists as well supporting his claim.

The proclamation not only attacked Henry but his allies, including Peter Courtenay (Bishop of Exeter), Jasper Tudor (Henry’s uncle), the notable Lancastrian loyalist John, Earl of Oxford (who was one of the greatest strategists of the age and ally Henry could count on), Thomas Grey (Marquis of Dorset), Sir Edward Woodville, and others as well, stating that “rebels and traitors disabled and attainted by authority of the high Court of parliament” also being accused of being “open murderers, adulterers, and extortioners contrary to truth, honour and nature” in addition to abusing “and blind the commons of this said realm of the said rebels and traitors have chosen to be their Captain one Henry late calling himself Earl of Richmond which of his ambitious and insatiable covetousness stirred and excited by the confederacy of the King’s said rebels and traitors encroacheth upon him the name and title of the Royal estate of this Realm of England. Whereunto he hath no manner, interest, righ or colour as every man well knoweth. And to the intent to achieve the same by the aid, support and assistance of the king’s said ancient enemies and of this his Council of France to give up and release in perpetuity all the title and claim that Kings of England have had and ought to have to the Crown and Realm of France.”

This last part is extremely serious because not only was Richard calling Henry ever nasty name in the book, but he was also accusing him of making a secret deal with the French of giving up England’s claim to the “the crown and realm of France” in order to have that country’s support.
The solution to Henry’s “insatiable covetousness” was supporting Richard who as “our sovereign lord” was a “well-willed, diligent, and courageous prince” who would put “his most royal person to all labour and pain necessary for the resistance and subduing of his enemies.”

Richard and Henry’s armies would meet the following year, not long after his wife’s death in that same year. The end result would be Richard dying battle and Henry becoming King of England, fulfilling his promise of marrying Elizabeth of York whose parents’ marriage was once again validated.

This is why history will always be a major triumph over every fantasy and sci-fi it inspires. It is way more violent and filled with more surprises than fiction can ever come up with. It shows us that the impossible can often become possible, and that as Varys told Tyrion in “Game of Thrones” a small man can cast a “very large shadow”. In the show’s seventh season, Cersei took on the role of Richard III when she issued a thunderous proclamation of her own against Daenerys Targaryen. Like Henry, she was exiled across the narrow sea and come to reclaim the Iron throne, but unlike the Welsh dragon, it is unknown whether she will ever achieve her goal given that the show and the books are amalgams of different eras. Nevertheless, it shows how the past continues to be relevant and serve as a major inspiration.
But whereas Cersei was posh and delicate before the lords, Richard III did not mince his words. As it was pointed out, he didn’t pull back any punches and continued to attack Henry’s character, reminding everyone that the last time someone had a Lancastrian king, England had lost all of its prized possessions in France, and that aside of that, Henry descended from a lowly branch of that house that albeit being legitimized, in the eyes of many, it was seen as a bastard branch of the Plantagenet dynasty.