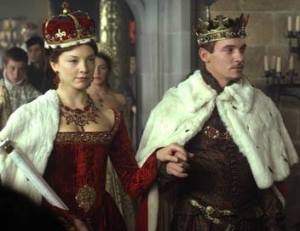 On September 1st 1532 Henry VIII created Anne Boleyn Marquis of Pembroke to give her social standing among the other noble and royal houses in Europe and so she would be fit to marry him. Pembroke had once belonged to his grand-uncle, Jasper Tudor, albeit he was created an earl by his half brother Henry VI shortly before the start of the wars of the roses along with his brother Edmund Tudor who was created Earl of Richmond (Edmund, was Henry VIII’s grandfather).

Anne wore her hair loose, dressed in ermine, wearing pearls and jewels and was accompanied by her cousin Mary Howard, the Countess of Derby and Rutland to the presence chamber in Windsor Palace where she knelt before the King, Charles Brandon and her uncle Thomas Howard and listened to Stephen Gardiner read the letters patent that confirmed her new title. After he finished, the King put a golden coronet on her head and placed a crimson velvet on her back. Less than a year after her elevation, the two married. Some historians place their marriage on January of the following year with one of her former chaplains or another priest performing the ceremony. Five months later she was crowned Queen of England and like her elevation, it was a grand ceremony, one of opulence and excessive glamour where the crown of Kings was placed on her head so no one would question the legitimacy of her marriage or the child she was carrying.