The marriage of Queen Mary and Philip, Prince of Asturias and King of Naples was no little thing. It was a big event and the date chosen, was in honor of Spain’s patron saint, St James. According to contemporary chroniclers, Winchester Cathedral was “richly hanged with arras and cloth of gold, and in the midst of the church, from the west door unto the roof, was a scaffold erected of timber, at the end whereof was raised a mount, covered all with red say, and underneath the left were erected two traverses, one for the Queen on the right hand, and the other for the prince on the left, which places served very well for the purpose.” 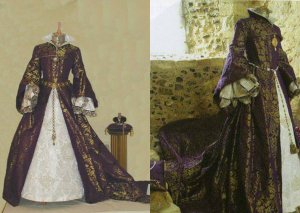 Mary and Philip were richly clothed in white and gold. Other sources differ, saying that Mary’s dress was one of rich purple. Purple as everyone will remember, was a color exclusively reserved for royals. Her dress was made in the French style. Besides the purple satin, it also contained wide sleeves “set with pearls of our store, lined with purple taffeta.” Philip for his part was dressed in white doublet and breeches with a “mantle of rich cloth of gold ornamented with pearls and precious stones and wearing the collar of the Garter.” The mantle was “adorned with crimson velvet and thistles of curled gold, lined in crimson satin, with twelve buttons made of four pearls on each sleeve.” Mary’s train was “borne up by the Marchioness of Winchester, assisted by Sir John Gage, her lord chamberlain”. After Mary was given away by the Marchioness and the three Earls of Bedford, Pembroke and Derby, the ceremony began. Gardiner reminded everyone that although Philip was a mere Prince, he had been given the kingdom of Naples, making himself an equal to their Queen. Gardiner also added that this marriage was agreed upon by parliament and the wishes of the realm. While he was not specific about the marriage treaty, it was implied that the true boss in this union would be Mary. She was Queen of England after all, and not just any Queen, but a Queen Regnant. Philip was there to help her make alliances, and make their country stronger, and last but not least, to give England male heirs to preserve both the Tudor and Habsburg line.

While Philip showed frustration with this agreement, it did not manifest right away. At the time it seemed like the two were, according to one Spanish chronicler, “the happiest couple in the world. More in love than words can say.”

After Gardiner finished his speech, the people cheered for them “praying to God to send them joy”. Then the ring was laid on the bible so it could be blessed, then Philip added three handfuls of fine gold. Mary followed suit. Her cousin, Margaret Clifford, opened the Queen’s purse so she could make an offering. The sword of state, came forth, symbolizing the unbreakable vow the two now shared. The mass finished with this last proclamation: 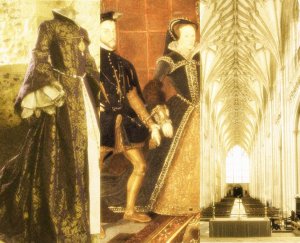 “Philip and Mary, by the grace of God, King and Queen of England, France, Naples, Jerusalem and Ireland, Defenders of the Faith; Princes of Spain and Sicily, Archdukes of Austria, Dukes of Milan, Burgundy and Brabant, Counts of Habsburg, Flanders and Tyrol.”

The couple then traveled by foot to the Bishop’s Palace where they dined in splendor. The Queen and King sat together under a cloth of state, with the privy councilors and ambassadors, and Spanish Grandees and English courtiers, sitting in separate tables. Edward Underhill reported that every kind of dish was served, with the plates being of pure gold.

To show their union was strong, Philip and Mary danced together, and the Spanish Grandees with “the fair ladies and the most beautiful nymphs of England.” This however is taken by some historians with a grain of salt. John Elder reported this with the intention to make the Spaniards appear like lusty creatures, when in fact, Spaniards reported that they found little appeal in the English ladies.

“They wear black stockings and show their legs up to the knee when walking. As their skirts are not long they are passably immodest when walking, and even when seated. They are neither beautiful nor graceful when dancing and their dances only consist in strutting or trotting around. Not a single Spanish gentleman has fallen in love with one of them.”

And the Spanish ladies thought no better of them, believing that they “are of evil conversation.” Underhill however, wanted to put the Spaniards to shame, and implied that the reason behind the Spaniards’ words was because they were too sour compared to the liveliness of the English.

The truth as they say, is in the eye of the beholder and it can be that both sources are both right and wrong. The Spaniards carried themselves with such grace and manners that might not have appealed to the English courtiers. When Mary’s mother was born, Spain was known for its love of clothing, pageantry, and other rich displays. The Spanish Princess had brought with her, her Spanish fashions which soon became a hit among the English girls. The farthingale became widely used, and while she did adopt English headdresses after she married Henry VIII; she continued with many of her Spanish customs, one of which was to party. Henry and Katherine partied a lot, and many of their picnics, and masques are well known. By the time Philip’s father became King however; Spain gradually changed. The country was united once more, but Charles brought with him a code of conduct he had learned from one of the most fashionable courts in Europe (Burgundy). The Book of the Courtier became the bible of every nobleman, it told them how to behave, dress, and even how to eat. It also had specific instructions for women. With all of this in mind, it should come as no surprise that when Philip and his entourage arrived to England, they found little appeal in its customs and its people, and vice-verse. 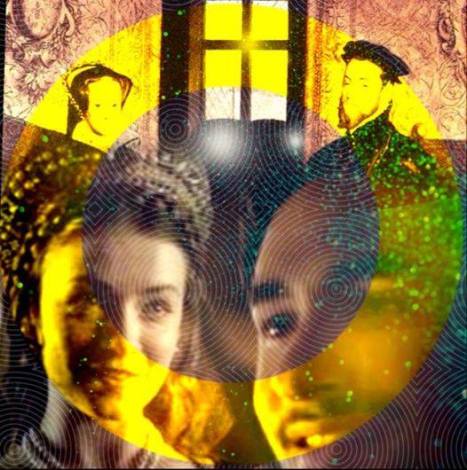 Mary married Philip on the 25th of July 1554 at Winchester Cathedral. The marriage was officiated by Stephen Gardiner. There is no source that speaks about the color of Mary’s dress, but thanks to the inventory, we know that her dress was one of rich purple (purple as everyone will remember, was a color reserved for royalty) with her husband-to-be wearing a robe “ornamented with pearls and precious stones” wearing the collar of the Garter, his breeches and doublet white “and over all a mantle of rich cloth of gold”. Mary’s train was the last one to arrive at half past ten “with all her council and nobility before her”. Her train was carried by the Marchioness of Winchester who was assisted by Sir John Gage, her lord chamberlain. The sword of state was carried by the Earl of Derby and she was attended by a “great company of ladies and gentlewomen very richly appareled.” Philip for his part was attended by the great noblemen of his Spanish court (the Grandees) and other courtiers who “were richly attired that neither His Majesty’s nor his Highness’ court ever saw the like.”

Even the heavy rain could not offset the glorious spectacle that was witnessed by English and Spanish courtier, and other guests of honor alike. While pop culture has been unkind to Queen Mary (I) Tudor, it is important to remember that Mary was the first Queen Regnant and as such, she was the subject of many attacks. But she was not a love-sick girl or crazy fanatic. Her policies, although ruthless, reflected the grim reality of the period. And her marriage with Philip reflects her own independence. Before the wedding began, the Bishop of Winchester made a speech in which he reminded his Spanish guests about the marriage treaty which clearly stated that although Philip was Prince of Asturias and King of Naples, he would have little control over English affairs, unless he was given royal permission. He also added that the wedding had been approved by parliament and was done in accordance to the wishes of the realm.

“With a loud voice Gardiner said that, if there be any man that knoweth any lawful impediment between these two parties, that they should not go together according to the contract concluded between both realms, that they should come forth, and they should be heard.” Then he asked “in English and Latin” who should give the Queen away and the “Marchioness of Winchester, the Earls of Derby, Bedford and Pembroke” gave her away “in the name of the whole realm.”

Afterwards, they heard Mass then went to the Bishop’s Palace where they “dined most sumptuously together” and enjoyed the rest of the celebrations. Over the following weeks, it was reported by a Spaniard visiting the English court, that Mary and Philip appeared “the happiest couple in the world, more in love than words can say” adding that he never left her side “and when they are on the road he is ever by her side, helping her to mount and dismount.” Philip played his role to perfection, as did his wife. But as the weeks turned to months and these turned to years, it became evident that the couple was anything but happy.