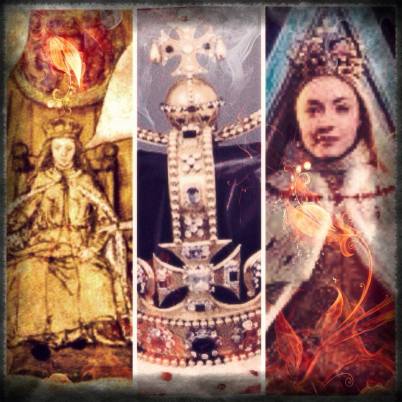 On Sunday, the 1st of October, Mary Tudor was crowned Queen of England at Westminster Abbey. She was the first female King in English history. Her day began early when she departed from the Tower of London, she was accompanied by her ladies and other nobles. As before, there were elements that were identified with the coronation for queen consorts, but also others that were of Kings. Instead of riding a litter as queen consorts had done, she chose to walk barefoot to the Abbey. She dressed splendidly for the occasion, wearing “parliament robes of crimson velvet under a rich canopy borne by the five barons of the cinque ports” in addition to having her hair loose with a circlet of gold around her head.

Following her were her ladies and gentlemen (by two) which included knights, aldermen, the French and Latin secretaries, councilors, the knights of the Garter, and those carrying the three swords which represented Spiritual and Temporal Justice, and Mercy. The sword of state was carried by Edward Courtenay (who’d recently been ennobled as the Earl of Devonshire), the Duke of Norfolk carried the crown, the Marques of Winchester carried the orb, and finally the Earl of Arundel carried the scepter. Mary’s train was carried by the Duchess of Norfolk who was assisted by Sir John Gage. Behind her were her sister and stepmother, the ladies Elizabeth and Anne of Cleves.

When she reached the Abbey, she would not have been surprised to find it decorated with heraldic symbols and popular Tudor images. The pulpit was covered in rest worsted, with the porch of Westminster Hall decorated with blue cloth. In addition, there was the royal chair which was covered in damask gold with the three lions and the fleur-de-lis representing the crowns of England and France –the latter which England still lay claim too and enabled Mary to add to her title of Queen of France as well.

Stephen Gardiner then turned to the crowds and gave the following announcement:
“Sirs, here present is Mary, rightful and undoubted inheritrix by the laws of God and man the crown and royal dignity of this real of England, France, Ireland, where upon you shall understand that this day is appointed by all the Peers of this land for the consecration, inunction and coronation of the said most excellent Princess Mary; will you serve at this time, and give your wills and assent to the same consecration, inunction, and coronation?”

To which everyone shouted “joyfully Yea, yea,” followed by “God save Queen Mary!”

Mary then made an offering to the altar and following with ancient tradition, she prostrated herself before it on cushions while prayers were being said for her. Then she rose and listened to the sermon from the Bishop of Chichester which had to do with obeisance to kings. 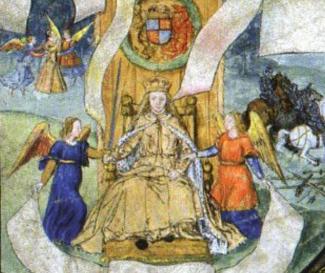 Then came the moment of truth. The moment that Mary had anxiously been waiting –and preparing- for all her life. The actual coronation. Still lying before the altar, she took the sacrament and said her oaths, and listened to the rest of the prayers. Then she went behind a screen at the left of the altar to make her first change of clothing. She was helped by some of her ladies. After she emerged she was anointed with the holy oils (by Gardiner) on her breasts, shoulders and forehead.

“Because so much depended on her anointing Mary had taken special care to ensure the validity of the ritual. She feared that the oils to be found in England were tainted as a result of the ecclesiastical censures brought against the nation by the pope many years earlier.” (Erickson)

This is true. Mary went above and beyond to make sure everything was perfect. So the oils were brought from Flanders. Judith M. Richards in her journal article about “Gendering the Tudor Monarchy” about Mary Tudor, discusses a lot of the issues regarding the first Queen of England’s coronation. Mary wanted to present herself as more than just a King, she wanted people to perceive her as both a woman and a king. Elizabeth would follow this model many years later when she addressed the troops at Tilbury in 1588 when she was at war with Spain. England never had a queen, and the concept of a female monarch was still very alien to many, even those that accepted Mary. So she had to thread very carefully. And one way she could be accepted without eliciting much criticism was by presenting herself as the paragon of virtue and morality (wearing her hair down and with a circlet as queen consorts traditionally wore) while at the same time, showing herself as ordained by god like monarchs before her. So here was a woman who was took the role of mother and guardian of her country, but also as an enforcer. And she made sure that people remembered this glorious day by having pamphlets be printed and distributed across Europe. (Not for nothing, her sister would take on the same roles, when on the eve of her coronation she would be compared to biblical figures like Esther and Deborah who were famous for upholding the moral values and preserving their people’s faith).

With a canopy being held over her head, she was given privacy to change back into her velvet robes. She then sat on the royal chair and was given the spurs and swords, had the ring placed on her finger then had the crown of Edward the Confessor placed on her head, followed by the Imperial crown and then another crown that was especially made for her.

Her subjects, including Gardiner and some of the courtiers that had carried the canopy and the heraldic symbols for her, knelt before their new monarch and swore their allegiance to her.  With the ceremony at an end the Te Deums being sung, Mary made her final offering to the Abbey (still carrying the orb and the two scepters of king and queen in her two hands) before departing for the state dinner that awaited her at Westminster Hall.

Feeling triumphant, Mary didn’t let the exhaustion win her over. Her sister and her stepmother were her guests of honor, seated next to her, basking in the attention and enjoying the spectacle that was being played out before them. There were some (like Renard) who didn’t like the Queen trusting Elizabeth with such honors, but Mary didn’t pay any attention to them. She was after all the daughter of a King and now the sister to the Queen, and she and her stepmother were awarded the highest positions that any man or woman could wish for. No other lady sat next to the queen or rode in a chariot that outranked the others. But there was a big difference between the sisters that Mary wouldn’t find out (or admit to it) until much later when the two became bitter rivals. For now though, she had no cause to worry. This was her moment and as far as she was concerned, it was meant to last.