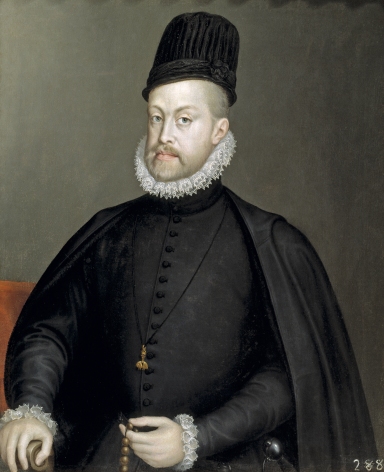 On the 13th of September 1598, King Philip II of Spain died at the Palace of Escorial. His last act as king was giving a written permission for one of his two favorite offspring, Isabel Clara Eugenia to marry. From his bed, he continued to sign document and meet with his advisers but it was clear to everybody that their king was dying and that his son (also named Philip) would become their new king.

His daughter, the Infanta Isabel, remained by his side, screaming at him that somebody was touching the relics that had brought him so much comfort during his agony, so he would wake up and keep him from dying. Unfortunately by the twelfth, he was too sick to do anything and when his ministers thought he died, he laughed softly to assure them that he was still alive and finding some dark humor in the fact that he was not long for this world. He asked for his parents’ crucifix and “kissed it several times and afterwards he also held a consecrated candle from our Lady of Montserrat … and kissed it too.” On the next day, his ministers watched as their king gave his last breath before “his saintly spirit left him to enjoy eternal life”.

To this day Philip II continues to be a controversial figure. The image of the “Black Legend” remains and it is not likely to go away very soon. As a monarch, Philip was no different than others. It can be said that he bled his country dry for his expensive wars, and although there was some justification in some of these, others were just for the same reason his enemies engaged in war: for pure demonstration of might.

Historians such as Henry Kamen defend him, exculpating him from his mistakes, pointing out that although in the latter half of the century in which he reigned “much had changed”, the economic problems at the end of his reign were the result of events that were completely out of his control. And these came to light after his death, receiving great criticism from people who had once praised and served him faithfully.

“Philip was never at any time in adequate control of events, or of his kingdoms, or even of his own destiny. It follows that he cannot be held responsible for more than a small part of what eventually transpired during his reign … He imprisoned within a destiny in which he himself had little hand’. He could do little more than play the dice available to him. Condemned to spend his days sorting out the workings of his vast web of a monarchy, he was among the few who had access to a broad perspective on its problems. But he was unable to turn that perspective into a vision that might inspire his people… Eminently efficient and practical, he struggled always with the immediate and the possible.” (Kamen)

And although Henry Kamen has a point, historians Geoffrey Parker and Hugh Thomas make more valid ones. Geoffrey Parker is fair in his assessment, denoting his flaws as well as his achievements and giving us a king who was flawed, efficient, and full of many contradictions while Hugh Thomas shows us how vast his empire was.

As a man Philip was pious in the sense that he was highly spiritual and cared deeply for his soul and on his last days, he refused to grant the pope one request because it went against his conscience. Despite this deep passion though, he was not above bullying his own church to get what he wanted and this is eerily similar from what his father and maternal grandmother did. And like so many kings during this period, there was a cruel streak in him. His contemporaries didn’t flinch from punishing their own people with the excuse that they were punishing enemies of the state (heretics, rebels, etc) and sending their troops against them. His father’s on and off ally and rival, Henry VIII did it on several occasions, and so did his offspring (one to whom he was married). Philip II made a public exhibition of an execution in October of 1568 where he hundreds of heretics were burned at the stake.
He was called the “Prudent King” by many because he showed a deep humility that they found lacking in many monarchs, and despite his piety, he allowed Protestant chaplains in some of his battles out of the Continent and refused to let the Jews be expelled from his non-Spanish domains (but he finally agreed in 1597) and more than his predecessors, he read every document that was put on his table. 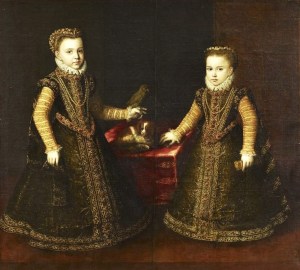 As a man though, he was deeply devoted to his children, especially his daughters, Isabel Clara Eugenia and Catalina Michaela. Both were some of the most educated and illustrious women of their day, and Philip’s letters to her survive to this day.

When Philip died, the Venetian Ambassador, Soranzo, wrote that “rich and poor universally show great grief” and acknowledged that he also grieved the King and that “for many the weeping will not end until life itself ends” adding that “he was a prince who fought with gold rather than with steel. Profoundly religious, he loved peace and quiet … He held his desires in absolute control and showed an immutable and unalterable temper.”

Philip II was buried the following day on Monday morning, in the church of San Lorenzo. Less than two months later, the criticisms began, largely by Franciscan friars and former members of his inner circle.

“Our Catholic King died after a drought that lasted almost nine months without a break, revealing that the earth had declared itself bankrupt –just like an unsuccessful merchant. At the same time, the price of everything in Castile increased as supplies ran short, coinciding with the collapse of public health throughout the kingdom and opening the door to plague in many areas … These disasters were harbingers of the greatest catastrophe Spain has even suffered since our Patriarch Tubal, grandson of Noah settled here.”-Fray Lorenzo de Ayala

Even one of the members of the Inquisition, the lawyer Martin Gonzales de Cellorigo, wrote that the decline of Spain had begun with Philip and that he:
“Grieved to see that, because we lack the funds, we undertake campaigns with such weak forces that they serve more to irritate our enemies than to punish them; and the worst is that, whatever we may say, we eternalize the wars so that they become an infinite burden, and the problems that stem from these wars are both major and endless.”

And yet, not to condone or to exculpate him and all other kings from their responsibilities, something Philip II comes to mind and that is that even for a person who had this much power, he was incapable of doing everything at once. “I don’t think that human strength is capable of everything least of all mine which is very feeble.” To his son, he once wrote that kingship is like a prison, and it is for the points already mentioned, but it is the burden they feel they have to carry, and in Philip’s case, he felt it was his duty to do the impossible to protect his kingdom.