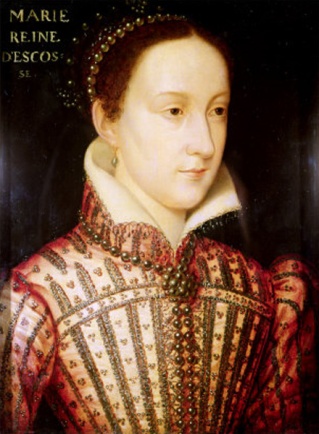 On this day, MQS (Mary, Queen Of Scots) & James Hepburn, 4th Earl of Bothwell were married at Holyrood House. The ceremony was conducted by the Bishop of Orkney. This action has often been criticized and taken as proof that Mary was an incompetent Queen. In the show Reign, I will give you the win, she is. In real life, the issue gets more complicated because she was far from the Mary-Sue-ish character she is often portrayed in Hollywood films. She was an intelligent, articulate, brave young woman who knew her position, and what was expected of her. However as Linda Porter, John Guy and other historians have pointed out in their respective biographies of her, she was raised as a Consort while in France instead of a Queen Regnant. This, no doubt, was problematic to many, including her defenders, who viewed that whoever she married was going to be the true ruler of their realm. (And it didn’t help that she signed, although coaxed, documents before her wedding to Francis that she would hand over the kingdom to the French crown if she died without issue). But her experience in French shaped her no doubt, being a close observer of court politics and seeing the family dynamics of the King, the King’s mistress and the King’s wife; her mother-in-law, Catherine de Medici. It was suggested after she became a widow that she married the next in line, her brother-in-law Charles, but Catherine and some French courtiers refused. The Guise family was rising too high and since her mother’s engagement to her father, the King of Scotland, they had been viewed as upstarts. She returned to Scotland and contrary to what is often shown in TV shows and movies; she didn’t seek to dethrone her cousin, Queen Elizabeth. Although Mary had a claim to the English throne as a descendant of the first Tudor monarch (Henry VII) eldest daughter, Margaret Tudor; she preferred to ‘charm’ her older cousin so she would name her, her heiress. She went so far to win Elizabeth’s favor that she started allowing Protestant mass and the book of common prayer. However, Elizabeth did not want to name any heirs for fear they would start plotting against her. Elizabeth I was justified in her fears, but this made MQS frustrated and very soon she started voicing those frustrations to her cousin via her ambassadors. In response Elizabeth told them that while she preferred MQS over the Grey sisters, she could not name her, her heiress yet. Furthermore, she added, if MQS wanted to remain on Elizabeth I’s good side, she had to refuse any offer of marriage unless she had her royal permission. Mary agreed but as Elizabeth I kept delaying the matter of the line of succession, she got angry and went ahead and defied her cousin, marrying her cousin Henry Stewart, Lord Darnley (another descendant of Margaret Tudor via her second marriage to the Earl of Angus). Elizabeth naturally panicked and had his family under house arrest, but this didn’t solve anything. MQS became pregnant right away and gave birth to a baby boy (the future James VI of Scotland and I of England). But things were not good for Mary, either. Defiance had a price and that price was in the form of a bad marriage. Disputes and disagreements, the two couldn’t reconcile no matter how hard his parents, especially his mother (the formidable Countess of Lennox, Margaret Douglas) tried. When Darnley was murdered, MQS was blamed and although evidence has been used to prove she was guilty, some recent historians have doubted the validity of the famous ‘Casket Letters’. Whatever the truth, MQS wasn’t his only enemy, he had many more in Scotland who were eager to see him dead. It is probable one of them killed him.

As soon as MQS knew, she tried to be diplomatic about it and arm herself to the teeth but failed. One notable courtier who often defended the young Queen (but wasn’t without self-ambition) got the idea of kidnapping her and marry her. Bothwell was “never a man to underrate himself or miss an opportunity”, Porter writes. He played a last part in MQS last parliament, and the day after he invited a number of the most influential lords to supper where he produced a draft of a bond he wanted his fellow lords to sign.

This was to confirm his innocence of Darnley’s murder and to defend himself of any lies said about him (using any means necessary), and furthermore to become Mary’s husband. The draft said Mary would be given a choice, but we all know what really happened when he encountered MQS’s party (who were headed to Edinburgh). Bothwell approached the Queen and said it was her choice to say yes or no, but there was not much of a choice.

“If she was truly kidnapped against her will, why did she not cry out or demand assistance as they passed through the various small towns and villages on route? There are several answers to this, the most obvious of which is that surrounded by a press of eight hundred horsemen it is unlikely that she could ever have been heard. But more persuasive even is the culture of the time: it would have been improper for a gentlewoman to try and fight her way out of the situation physically and, besides, Mary had no means of so doing even if she had been minded to try and escape. She does appear to have sent her messenger, James Borthwick, to Edinburgh to seek help from the citizens there, but all they could manage was tow salvoes of cannon as the riders went past them at speed. Mary was not completely at Bothwell’s mercy. When they arrived at Dunbar he dismissed all her ladies-in-waiting and replaced them with his sister Jane Hepburn the widow of Lord John Stewart, Mary’s favorite half-brother.” -Porter

There is plenty of evidence that points that Bothwell did rape Mary and since a Queen, although God’s anointed monarch, was supposed to protect her country and her reputation above all else; she could say very little. If she did scream or cry or denounce Bothwell she would have been seen as incompetent by the men of her times, including her cousin, who would use this opportunity to say that this was a Queen who was acting irrationally, who couldn’t control her own subjects and as a consequence, it was her fault for being so dumb. That was the thinking back then (and sometimes today too). With so few options, Mary could do nothing but recognize the marriage and accept it had happened. Furthermore, she was fearful for her son’s future. There were so many people who could abuse him, shape him into becoming something she dreaded, if she was deposed. So Mary did what so many women back then did, deny the charges of violence and tell her lords on the 12th of May that she forgave Bothwell for everything he had done, two days later she signed their marriage contract and on the fifteenth, she married him.