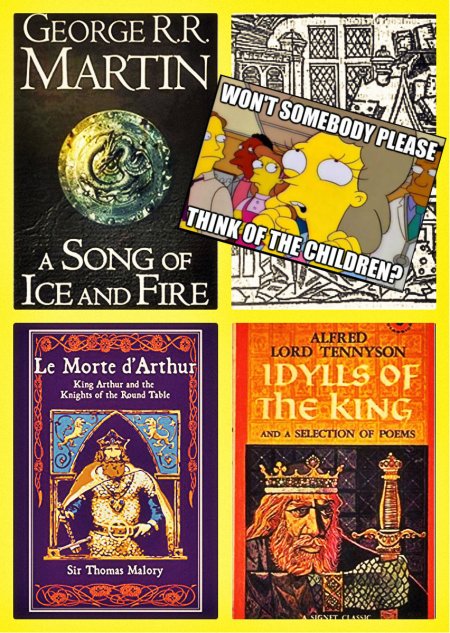 Nowadays people complain that Game of Thrones, The Shannara Chronicles or any other modern dark fantasy is too violent. ‘Everything on TV is too violent.’ And then they go Helen Lovejoy from the Simpsons: ‘Won’t somebody please think of the children?!’ But did you know that there was a plenty of violence in all the medieval romances where George R.R. Martin, Terry Brooks and countless other fantasy authors have taken inspiration from?

We think that this is something recent. That authors in the good old days did not shock their audiences with vivid descriptions of brains splattered all over the stony ground (or wherever it was they did battle), and depraved carnal acts.
They knew better than that!

Well, boys and girls, that’s not how it went down. That is how the late 18th and 19th century writers would want you to believe (and some contemporary novelists) but in reality, medieval romances were filled with carnage and sex.

Just read Le MorteD’Arthur by Sir Thomas Mallory, written at a time when England was embroiled in a violent civil war and you will see what I am talking about. Or better yet, read Chretien de Troyes. You do not have to go through all of his poem, just pick one at random dealing with the legend of King Arthur, and you will see nothing romantic about this legend. That is because our concept of romance is VERY DIFFERENT from what the medieval people saw as romance.

The more I revisit medieval romances, the more I fall in love with them (all over again). They are gory, sadder, than anything written recently. In a way, they were trying to copy their predecessors, Greek and Roman writers.

The way that Chretien, Sir Thomas Mallory, and several other medieval authors portrayed these legendary figures left a lot to be desired. And I do not mean this in a bad way. Arthur was a flawed character, his knights were less than perfect. Whoever wrote “Sir Gawain and the Green Knight” perfectly shows this. Sir Gawain sleeps with the Green Knight and (spoilers) after finding out that it was all a trap by the magical Green Knight (whom he previously chopped his head off), he gets angry but his anger turns to regret as he begs his opponent to absolve him.

Chivalry was one of the core tenets of medieval society. People aspired to be greater than their ordinary selves. This code of conduct was reserved for the rich, and only a select class of rich people. Aristocrats, Kings, and Queens, were seen as the moral arbiters of society. They were held to a higher standard than anyone else, people lived and died by their example.
But we are all human; we make mistakes. Some people learn from their mistakes, others refuse to accept any responsibility and continue to make them.
The Arthurian characters erred many times. Most of them picked themselves up and did their best to rectify their mistakes by becoming better people starting with them admitting they had done something wrong. 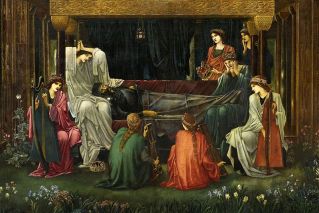 What the 18th and 19th century monarchs were smarter than their predecessors was in their approach to these figures. Rather than aspiring to live up to their example, they took a step back, read between the lives, examined their lives and used their failures as a way to reinforce their moral codes unto society.
What Victorians ended up getting was a morality play set in a pristine place that was ruined by human vice. 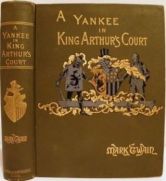 Out of all the writers of this era, the only one that didn’t follow this formula was Mark Twain with his science fantasy novel ‘A Connecticut Yankee in King Arthur’s Court’ Originally intended to be satire, the author’s brutal depiction of the medieval era and use of sarcasm is truer to the medieval romances that popularized this legend than anything his contemporary Victorians wrote.

Gone was the sex and violence and acts that were too much for the Victorians to handle. Gone was also the political commentary. Some scholars believe that Sir Thomas Mallory used the Arthurian legend to criticize the two major branches of the Plantagenet Dynasty that had plunged England into a bloody dynastic civil war that lasted over three decades.
Victorian writers did not want their audience to read between the lines. It was okay if aristocrats did it with older version of the novels that depicted a cruder and less civilized age, but not for the common populace who wanted something different (and far less complicated).

The end result is the medieval era as the new protagonist of Arthurian lore. An Eden-like setting filled with magic and beauty; the ideal place to escape.
This formula became so successful that it is still employed in TV, movies and other pop culture mediums.
To loosely quote what the character Fry from Futurama said, people do not want to be reminded of their dreary existence. They want to be spoon-fed the same old tired formula because otherwise, they will get confused or scared.