This is a great article on Katherine Parr’s first husband. 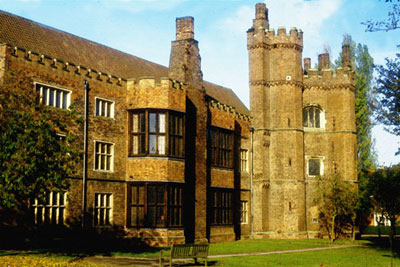 Gainsborough Old Hall, at one time was home to Katherine and her husband, Sir Edward.

Maud Parr looked to the Northern families for her daughter’s marriage after the deal with Lord Scrope of Bolton did not play out. In the lands of Sheriff Hutton, where her son William had once resided in the Duke of Richmond’s household, Maud found the royal surveyor of the castle, manor and lands, Sir Thomas Borough of Gainsborough, who was a distant kinsman of her husband, Sir Thomas Parr.[1]

The Boroughs of Gainsborough in Lincolnshire were and old and well-established gentry family. Sir Thomas’ grandfather, the 1st Baron had been an outstanding Yorkist in the reign of King Edward IV in the neighborhood of fanatical Lancastrians. He was a tough-minded and hard-handed individual who was given the Order of the Garter in 1496 by King Henry VII proving…